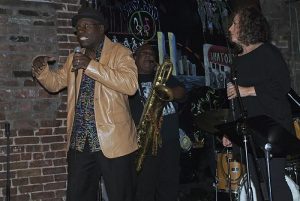 “Build Our Occupations” a musical tribute.

BY RORYDEAN@localmusicvibe.com
The Occupy Oakland Movement inspired a group of Bay Area artists, musicians and ‘people of the 99%’ to come together and share their experiences, feelings and aspirations in song. To coincide with the general strike, the group gathered with David Sturdevant of the San Francisco Medicine Ball Band at the Plymouth Church of Jazz & Justice in Oakland and recorded their song:
“Build Our Occupations” a musical tribute.
The lyrics were written by Jazz poet Raymond Nat Turner of “UpSurge” to the classic Temptations song “Just My Imagination (Running Away with Me)” with Vukani Mawethu Choir, and the Plymouth Choir, conducted by Chelle Jacques. The group performed and recorded this video on Wednesday, November 2nd as Oakland and its Port were effectively shut down by peaceful protest over the course of the day. Thousands of demonstrators and others made the long trek from Frank Ogawa Square to the Ports and back again.
This is their video tribute.

I first met Raymond when he performed at our Harriet Tubman Centennial Symposium in November 2013. His reverence for the woman he calls “Mama  Harrietas” is so strong that he wanted to come back to Auburn to see the places where she worked and lived for 50 years. He is a poet of power and eloquence and music. The Harriet Tubman Boosters are proud to have sponsored this poetry workshop for young people in our community and hope to see Raymond Nat Turner here again.